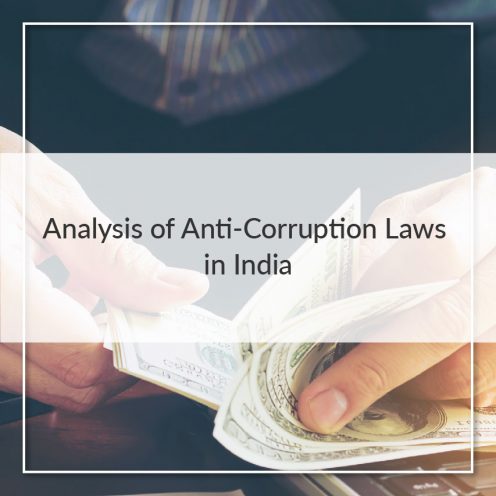 Analysis of Anti-Corruption laws in India

By Shruti Singh and Krishna Garg (Research and Editorial Team)

Corruption is an impediment for a country’s progress and especially detrimental when it is prevalent in an economically weaker country such as India. Corruption leads to a compromise of financial, cultural and social structure of a country. In this article, we intend to analyse the regulatory framework and the laws governing anti-corruption policies and the consequences of non-compliance. A possibility of change in the anti-corruption landscape with the passing of the POCA Amendment Act has also been discussed. Furthermore, opportunities for companies to design preventive and compliance mechanisms have been touched upon briefly.

In India, criminal activity of corruption is governed by the Indian Penal Code, 1860 (IPC) and the Prevention of Corruption Act, 1988 (‘POCA’). The new amendments were made to POCA which provide for supply-side prosecution, among other key changes and was passed by both the houses of Parliament and received the assent of the President on July 26, 2018. Apart from the possibility of criminal prosecution under POCA, there a possibility of being blacklisted which is subject to investigation. Notwithstanding the lapsed Public Procurement Bill, 2012 different Government departments have procurement rules, the negation of which may put prosecution in motion. Concerning public procurement contracts, the Competition Commission of India (‘CCI’ / ‘Competition Commission’) has the power to check information suo moto and take cognizance of cases sans a complainant before the CCI. Company law too has made provisions for anti-corruption which shall be further elaborated in this article, along with the anti-corruption jurisprudence in the Income Tax Act.

Anti-Corruption laws under the Indian Penal Code, 1860 and the Prevention of Corruption Act, 1988

India’s policies governing corruption and anti-corrupt practices covers a vast gamut of regulations and Government guidelines. The IPC had successfully criminalised various corrupt activities such as taking bribes, influencing a public servant through corrupt and illegal means, and public servants accepting valuables in the form of accepting gifts. All these provisions (Section 161 of the IPC to Section 165A of the IPC) were repealed by the POCA for a more streamlined regulatory approach to counter corruption.

In 1988 the Prevention of Corruption Act was enacted with the objective of uniting all the laws that governed offenses committed by public servants. POCA in its initial years had ruled bribe taking to be a public offence and did not criminalise bribe-giving. The 1988 legislation vide Section 7, Section 8, Section 9, Section 10 and Section 11 of POCA criminalised different corrupt acts of public servants and middlemen that influence public servants per se while excluding the bribe giver and the private elements that indulged in accepting bribes.

Even though the application of POCA was limited to public servants, the adjudicatory courts have set precedent for an extended definition of the word ‘public servant’. For example, in Central Bureau of Investigation, Bank Securities & Fraud Cell v. Ramesh Gelli & Ors., the Supreme Court of India (‘herein after referred to as the Supreme Court’) held that the Chairman and Directors of a private bank would also qualify as ‘public servants’ under POCA.

Since its presentation in the Parliament on August 19, 2013, the POCA Bill went through myriad changes in light of the Law Commission Report. In the wake of five monotonous years since its presentation, the POCA Bill was passed by the upper house on June 19, 2018, followed by the lower house on June 24, 2018. The POCA Bill received the consent of the President on July 26, 2018 and the POCA Amendment Act of 2018 came into force. The key changes that have been introduced in the POCA vide the Amendment Act are as follows:

The Income Tax Act, 1961 (‘IT Act’) lays down deductions on items of expenditure incurred by a taxpayer. The IT Act also provides for contributions to political parties and deduction of such contributions from the total income of the taxpayer. The IT Act further prohibits payments that are made illegally. Section 80 GGB and Section 80 GGC of the IT Act provides for deductions towards contributions made to political parties by eligible taxpayers. These deductions are permitted in the non-cash contributions that are made by the eligible taxpayers excluding local authority and artificial juridical persons which are partly or wholly Government funded. All illegal payments are prohibited and no deduction on the same can be claimed by a taxpayer. The explanation to Section 37 (1) of the IT Act rules that an expenditure incurred by a taxpayer for any reason which is an offense or which is restricted by law will not be considered to have been caused with the end goal of business and no allowance will be made in regard of such use.

Anti-competitive practices are prohibited under the Competition Act, 2002 (‘Competition Act’) and the CCI can take suo-motu cognisance of such cases and direct examinations in cases which the CCI is satisfied that on prima facie are anti-competitive. The Competition Act prohibits anti-competitive conduct including  misuse of dominance by an entity in the market. Entities are additionally restricted from imposing unfair and discriminatory terms of sale, purchase of goods, or services. There has been found nexus between specific anti-competitive practices and possibilities of corrupt practices triggering a priority for actions in such situations. On one such occasion CCI took cognisance based on reports of CAG. For this situation, while CAG gave an adverse finding against a portion of the workers of specific Ordnance Factories, it is essential to take note that in specific situations, examinations by one organization can likewise prompt examination by another. Therefore, a company that is facing allegations of corrupt practices may likewise be investigated for anti-competitive behaviour such as maltreatment of dominance and cartel-like conduct.

Political contributions are not fundamentally prohibited, and permitted subject to satisfaction of specific conditions in the Companies Act, 2013 (‘Companies Act’). The Companies Act mandates a vigil mechanism and an audit committee within Companies with the objective of better corporate governance.

Section 182(1) of the Companies Act, 2013 (‘Companies Act’) says that neither Government Companies nor companies that have been in presence for under three years are allowed to make political contributions. The Companies Act does not define as to what comprises a ‘contribution,’ but Section 182 (2) determines that a gift, membership, or instalment caused to be given by an organization for its benefit or on record to an individual, as far as anyone is concerned, is continuing any activity which can sensibly be viewed as liable to influence public help for a political party and will likewise be viewed as a contribution. Furthermore, direct or indirect, advertisement by a company in any publication – i.e., a trinket, handout, parcel, flyer – on the behalf of or for the advantage of a political party is to be considered as a contribution. Eligible companies may make a contribution in any financial year provided that such contribution shall not exceed 7.5% of its average net profits during the three immediately preceding financial years.

Corruption hampers an individual’s development as well as the aggregate development of an economic system. Subsequently, the Prevention of Corruption Act, 1988 intends to control and prohibit corrupt practices. As per the enactment a lot of control and power has been vested with the Central Government and the State Governments in situations wherein, they can nominate Special Judges and give approvals in investigation. The POCA despite its shortcomings is a competent legislation that requires execution to check corrupt practice.