THE ASSOCIATION OF INTELLECTUAL PROPERTY LAW AND BLOCKCHAIN

By Shreya Rai and Rishabh Moon (Research and Editorial Team) 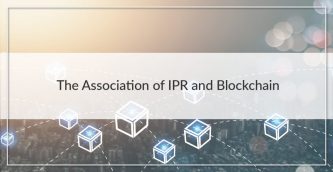 Blockchain Technology has gained momentum and traction in the past couple of years owing to its decentralised and highly secure nature, and has inspired confidence due to its virtual “unhackability”. In addition, with the budget announcement regarding potential cryptocurrency laws, it becomes all the more relevant to examine the potential use and application of blockchain in other arenas prone to exploitation like Intellectual Property.

Intellectual Property Laws are falling short in face of the rising cybercrimes surrounding them like cybersquatting and theft of copyrighted work. What is even more difficult in tackling such violations is the issue of trackability and jurisdiction. In such a case, blockchain becomes a reasonable choice to protect IPR.

Factoring in the above discussion, this article aims to discuss the interaction and discourse of blockchain and IPR and the application of both these fields into one another leading to a more productive and secure outcome.

Simply put, blockchain is an open ledger of data that can be used to record and track transactions and is transferred and verified across a peer-to-peer network.  Because of its potential applications, blockchain is appealing to a wide range of sectors. Cryptocurrency, transaction, and contractual data, as well as data files, images, videos, and design papers, may all be uploaded to a blockchain. And the technology is still evolving, with new forms of distributed ledgers emerging, such as hashgraph software, which aims to solve scalability difficulties.

Governments or their subordinate IP repository agencies are in charge of managing IP rights. These mechanisms have physical limits, and they frequently lack the capacity to defend such rights. Piracy of copyrighted works has become a serious concern since the introduction of internet sharing techniques, and as the market becomes more concentrated and globalised, the issue will undoubtedly become more difficult to address, necessitating the development of more feasible and reliable alternatives. In the same vein, Blockchain technology provides some unique solutions, which will be discussed further.

Possible interface of Blockchain in IP

The most popular applications of blockchain in IP are IPR protection, registration, and evidence. It will be more affordable and quicker. As a result, it will aid in controlling and tracking the distribution of IP, as well as presenting evidence of legitimate and/or first use in trade and/or commerce; digital rights management; establishing and enforcing IP agreements, licences, or exclusive distribution networks via smart contracts; and transferring payouts in real-time to IP holders.

The most significant use might thus be in the field of Smart IP Rights, which can be accomplished by storing IP Rights in a Distributed Ledger rather than traditional databases. A related usage might be that IP offices employ distributed ledger technologies as an accountable government authority, increasing trust in the technology while also creating a nearly immutable record of events throughout the life of a registered IP, including its first application, registration, and use. This might also be effective in jurisdictions where proof of first or genuine use is necessary, or where the degree of usage is important, such as in trademark disputes or other procedures involving well-known marks, or in defending a non-use revocation case.

When it comes to unregistered IP, Blockchain can adduce evidence of rights such as copyright and unregistered design rights, since uploading an original design or work, as well as the details of its designer or author, to a blockchain will generate a time-stamped log and concrete evidence to establish such issues.

An even more significant application is the idea of smart contracts, which could be used to implement and enforce IP contracts such as licences, as well as allow payments to IP holders to be made in instantaneously. “Smart information” regarding IP rights in protected content, as in a song or a picture, could be encrypted in digital form. When certain criteria are satisfied, smart contracts exist on the blockchain and execute functions, such as granting access to the information recorded on the block. An owner can provide licences to users who wish to access intellectual property by validating the user’s digital signature utilising this functionality. An owner can also use this method to deny someone accessibility to their work. By entering into the contract, smart contracts may also be used to collect royalties from persons who are utilising and accessing intellectual property.

Furthermore, because a ledger records ownership, licencing, and other data, it would help to prevent counterfeiting by allowing customers and other government agencies to verify that a product is real.

The republic of Georgia recently implemented a blockchain land registry system, which resulted in the registration of around 1.5 million land titles in under 3 minutes on average. In the U.S states of Ohio, Vermont, Illinois, and Arizona, blockchain records have been accepted to be evidence if it is digitally signed. In the United Kingdom, a pilot project has been launched in 2018 August at the Her Majesty’s Courts & Tribunal Service where Blockchain technology will be used to store digital evidence securely. This demonstrates a highly effective mechanism that may be used for IP registration and legislation.

For the first time, a court in Hangzhou (China) acknowledged Blockchain-based evidence in 2018, and the Chinese Apex court soon followed suit in 2019, affirming the use of evidence stored and validated on blockchain systems.

Talking about corporates, Binded collects copyright registrations from businesses and records them on the blockchain. This enables them to keep a permanent, irreversible, and easily accessible record of the registration. Bernstein is a firm that provides a blockchain method for registering intellectual property paperwork. Uploading records on the blockchain ties them to an unchangeable timestamp while keeping the information private since it is encrypted locally. Another business, IPwe, is developing a blockchain platform to enable for more efficient patent licencing methods. Users may sell licences for patents that they have registered on their blockchain, and buyers and sellers can join to the platform and interact via smart contracts.

Non-Fungible Tokens (NFTs), a digital instrument with unique properties that is being linked with the usage of blockchain to maintain exclusivity, are now the most popular interface of blockchain and IPR. Discogs is a website and a DRT-based database for music recording information. The artist can upload key, tempo, and other musical metadata as well as transact in music and ensure a DLT based transaction in rights and royalty.

Although applying blockchain to IP appears to be a potentially lucrative notion, the underlying limitations must be considered. Even now, the main stumbling factor is a lack of understanding of blockchain. Implementing this technology with government officials would be difficult and need extensive training, particularly in India, where land records and other data are still being digitised. If blockchain is utilised for IP, another key problem would be the massive quantity of data that will be generated and kept. The regulation of blockchain will prove to be the most difficult task from a legislative and legal viewpoint, given the technology’s intrinsic decentralisation. Furthermore, considerations such as jurisdiction and traceability must be considered.

There would need to be an agreed-upon and internationally accepted set of standards for blockchain technology to gain traction in the administration of IP rights. Regulators and policymakers will need to collaborate to assist guide the application of this technology in connection to IP rights.